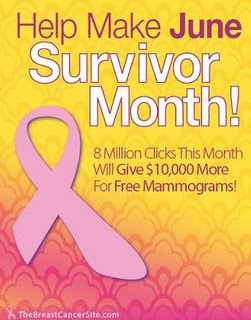 I have been tagged by Mommy Cielo, Mommy Rosselle and Mommy Charm.

Here’s what I got from Mr. Wiki on Breast Cancer Signs and Symtoms:

Indications of breast cancer other than a lump may include changes in breast size or shape, skin dimpling, nipple inversion, or spontaneous single-nipple discharge. Pain is an unreliable tool in determining the presence of breast cancer, but may be indicative of other breast-related health issues such as mastodynia.

Another reported symptom complex of breast cancer is Paget’s disease of the breast. This syndrome presents as eczematoid skin changes such as redness and mild flaking of the nipple skin. As Paget’s advances, symptoms may include tingling, itching, increased sensitivity, burning, and pain. There may also be discharge from the nipple. Approximately half of women diagnosed with Paget’s also have a lump in the breast.

Learning and Preparing About Monkeypox in the Philippines

How to Stay Happy, Healthy, and Vibrant

I’m presently fighting colon cancer using a drug called Xeloda. This drug was originally used for breast cancer and seems to be working for my cause. I can’t not stress the importance of getting checked when you THINK you have a problem. DON’T BE CHEAP or LAZY – visit a doctor or TWO. Not all doctors are correct – so I advise to see two if you think something is wrong. IT IS YOUR LIFE.

Thank you so much Mommy Ruby 🙂

thanks for the tag mommy ruby! i’ll get to it pag-uli nako gkan sa party…hehehe 🙂

Breast Cancer as with other types of cancer, can be prevented by early intervention.-,’