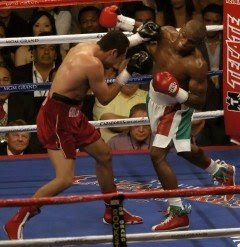 Though I am a mommy, I am really fond of watching boxing (maybe because we have really good boxers here in our country too). I grew-up with a dad who loves boxing and even married a guy who loved boxing too! Well, I don’t really trace the history of each boxer but I really do mark the calendar when good boxers are slated in the arena. One of those international boxers that I always look forward too is the fights of the Golden Boy himself – Oscar De La Hoya! Aside from being so handsome, he is a very good boxer. Though, he has been involved in many boxing events lately with Golden Boy Promotions but this time, I was really shock and at the same time excited because this handsome boxer will be fighting Floyd Mayweather Jr. this coming September 20, 2008 at Las Vegas, Nevada. Actually this is a rematch from their previous bout last May 5, 2007 where Floyd Mayweather Jr. won the fight on a split decision after 12 rounds of quality boxing. That match was really sensational because it grossed more than $134.4 million in pay-per-view revenue and a whopping $18.4 million in live gate!
Anyway, since this is a rematch and the first one was a blast, I guess many people just like me are eagerly waiting for this event. Most people now are buying Oscar De La Hoya vs Floyd Mayweather Jr. tickets online just to get the best seats!! Well, I don’t blame them, it is always good to get one first before it’s too late! This is the kind of event that really fills an arena to the top most level!!
0 comment

My Other Blog Failed