To make our marriage more meaningful, I tried observing what hubby and I have in common that the both of us really like. Of course, we both love Micah and David, which is the greatest thing we have in common but what I was trying to say is that something we like doing together. So after a month of observation and reminiscing our past of almost nine years of marriage, I have noticed that we really like M&M’s!! Oh we really do love the candies but what I meant was music and movies. He heart music so much that he could play almost every instrument in a band, from guitars, keyboards, bass, acoustic and drums. Aside from that, he could also sing very well. As for me, I love listening to music practically from the moment I wake up until the wee hours of dawn! Movies?! We share the same tastes actually. He likes watching actions, suspense, comedy, sci-fi thrillers, horror, and classic love stories. And guess what, so do I!! Most of our bonding time is involved around M&M’s including the candies (seriously)!! 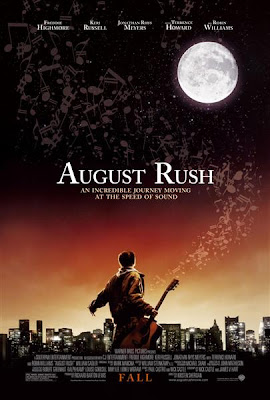 Anyway, the most recent movie we watched was “August Rush.” It was a movie about love and music. It was so great that my hubby and I watched it with great admiration of how the story goes. It was about an orphaned boy who is a musical prodigy who ventured to the streets of New York by following MUSIC. He also wanted to play hoping that when his parents can hear him so that they will be reunited as a family. The cast includes Freddie Highmore, Keri Russel, Jonathan Rhys Meyers and Robin Williams. August Rush is filled with wonderful melodies and songs from classical music to modern day rock.

If you want to watch a great movie with your special someone or your family including the kids, August Rush is a highly recommended!

Hi Ruby! It's nice to see u and hubby spending more time together and those M&Ms sure look tempting! :):):)

i love M&M's too. and it's great that you took time to ponder on the common thing you and hubby share.

anyway, august rust will be in my movies-to-watch list.

nice, I like M&M's.. hehehe.. I heard August Rush from my mom and she loves it very much that she have the soundtrack on her player. lol.. I like the songs but I never watched the movie. 😀