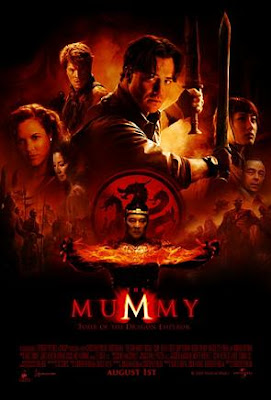 Last Friday, my hubby, my kiddos and I have finally watched The Mummy – Tomb of the Dragon Emperor. It was an experience for us because it was the first time we got flagged down. My baby boy was not allowed to enter the cinema because he was still four years old and the movie requires 5 and above for children. So, we tried explaining it to them that our child is mature enough to handle a scary mummy since he have watched the both the first earlier series. Besides, it was the request of the baby boy to watch The Mummy 3. After a few minutes of explaining, they have allowed us to watch the movie if I signed a waiver. So, I did!
The movie was OK. It was funny as expected but it didn’t meet my high expectations. It only ran for 1 hour and 54 minutes, very short. There were few fight scenes between Jet Li and Michelle Yeoh while Maria Bello couldn’t match Rachel Weisz as Evelyn O’Connell. I guess the overall cinematic chemistry of the cast couldn’t compare from the previous movies. I still believe if they have the old cast with the new villains and co-stars, the movie might come out beautifully!

My brother and I have been anticipating this movie for months. I was deeply disappointed that Rachel Weisz wasn’t part of the cast.

Thanks for the review, I’ll try to keep my expectations low when I see it within the week.. haha