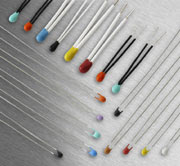 When I was in college, I always encounter the word resistor in some of my electronics related subjects. But little did I know that there are other things that I haven’t learned yet! Since I was searching at WikiPedia the other day, I can’t help but surf and surf through their pages. And then I came to a page that made me stay even longer. It was the first time that I have encountered the word thermistor!
If you type it in your Word program, it will show as RED – meaning wrong spelling – because it is not a commonly used term. So, I researched what a thermistor is. And this is what I found…According to Mr. Wiki, a thermistor is…

“… a type of resistor with resistance varying according to its temperature. The word is a combination of thermal and resistor. Samuel Ruben invented the thermistor in 1930, and was awarded U.S. Patent No. 2,021,491.”

So, from the meaning itself, it’s a resistor (regulates the flow of electricity) that uses temperature as basis for its primary function to which it will be used. A thermistor is widely used in temperature sensors, self-regulating heating elements and other thermally regulating gadgets. If big appliances like air conditioners and refrigerators uses a thermostat to regulate temperature. A thermistor regulates electricity to help the thermal-related gadget function properly in relation to temperature reading.

Well, I hoped I shared something new from my little discoveries on the net.

How Rich Will You Be??

My Pain-Free Solution is Now A Click Away with Sanofi’s...

Earn Up to 5000 Pesos with PayMaya

Got Myself a New Laptop – ASUS VivoBook S15

Managing My Finances Got Easier with GCash