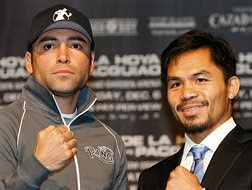 Photo Credits: HBO
Manny Pacquiao won by TKO when Oscar de la Hoya failed to answer the ninth bell. Most of the rounds in the fight were attributed to Manny Pacquiao. He has been giving punches to de la Hoya the whole time while Manny seemed to be not affected by Oscar’s punches.

It has been rumored that this is Oscar de la Hoya’s last fight. Anyway, this is another glorious day for “The People’s Champ” and all of us Filipinos. Though I am Team Pacman already, I am a bit sad because I became an enthusiastic boxing fan because of Oscar de la Hoya.

Congratulations to Manny “PACMAN” Pacquiao!! You have done it again!

My Blog is A Big Mess!

Kudos to Manny! He did a great job and always fight a true champ!
have a great day :]