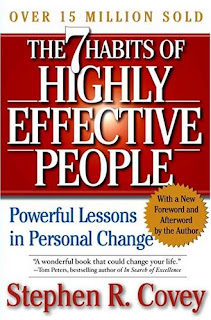 My husband was chosen to attend a three day seminar for their company. I really thought that he was attending a technical seminar but when he arrived last Wednesday, I was amazed by the materials he brought home. He was attending a seminar on “The Seven Habits of Highly Effective People.”

Anyway, aside from the beautiful seminar materials, I was amazed on how he takes the lecture seriously. He seems to like it very much because he tends to apply what he have learned. So, I checked on what these seven habits are all about and this is what I have found:

The chapters are dedicated to each of the habits, which are represented by the following imperatives:

1. Be Proactive. Here, Covey emphasizes the original sense of the term “proactive” as coined by Victor Frankl. You can either be proactive or reactive when it comes to how you respond to certain things. When you are reactive, you blame other people and circumstances for obstacles or problems. Being proactive means taking responsibility for every aspect of your life. Initiative and taking action will then follow. Covey also argues that man is different from other animals in that he has self-consciousness. He has the ability to detach himself and observe his own self; think about his thoughts. He goes on to say how this attribute enables him: It gives him the power not to be affected by his circumstances. Covey talks about stimulus and response. Between stimulus and response, we have the power of free will to choose our response.

2. Begin with the End In Mind. This chapter is about setting long-term goals based on “true north” principles. Covey recommends formulating a “Personal Mission Statement” to document one’s perception of one’s own vision in life. He sees visualization as an important tool to develop this. He also deals with organizational vision statements, which he claims to be more effective if developed and supported by all members of an organization rather than prescribed.

3. Put First Things First. Here, Covey describes a framework for prioritizing work that is aimed at short-term goals, at the expense of tasks that appear not to be urgent, but are in fact very important. Delegation is presented as an important part of time management. Successful delegation, according to Covey, focuses on results and benchmarks that are to be agreed upon in advance, rather than prescribed as detailed work plans.

4. Think Win/Win describes an attitude whereby mutually beneficial solutions are sought that satisfy the needs of oneself, or, in the case of a conflict, both parties involved.

5. Seek First to Understand, Then to be Understood. Covey warns that giving out advice before having empathetically understood a person and their situation will likely result in rejection of that advice. Thoroughly reading out your own autobiography will decrease the chance of establishing a working communication.

6. Synergize describes a way of working in teams. Apply effective problem solving. Apply collaborative decision making. Value differences. Build on divergent strengths. Leverage creative collaboration. Embrace and leverage innovation. It is put forth that when synergy is pursued as a habit, the result of the teamwork will exceed the sum of what each of the members could have achieved on their own. “The whole is greater than the sum of its parts.” Mathematically this can be written as 1+1=3.

The Seven Habits of Highly Effective People is a book written by Stephen R. Covey. It was first published in 1989 under the self-help book category. through the years, it was read and applied by people in leadership positions. Now, it has evolved to a three day seminar conducted and given to leaders of big corporations, companies and business owners worldwide.

That means my husband is so lucky to be chosen to attend because the seminar cost around 20,000 pesos per head. And aside from that, is the company considering him to be placed in a much challenging position?? Hehehe… this is very exciting!

Anyway, I am just glad that it has a great effect on him. The application really matters to me!

Eyeglasses for the Holidays!

Should be an excellent seminar!

Congratulations to your hubby. It seems that your hubby is doing good in his field. My hubby too is undergoing the Management Training Seminar.